After Mission Control let us loose in Chicago with our new car, we decided to take a quick jaunt up to Superdawg to give Pepper the drive-in experience. Many a car buff has been known to hang there, so we thought we would show off our shiny new toy.

When we pulled into the parking lot, a man asked us if we were dining inside or out. When we told him outside, he grinned and said, "Right this way! If you back in to this spot, you'll be in some of the shots!" That was when we noticed about a dozen people laden with various camera and audio gear strategically placed around the parking lot. A flag bearing the Food Network logo flapped in the wind, and we knew at once we had struck gold.

As soon as we parked, a swarm of people hovered around the Fiesta, asking questions, snapping photos, sitting inside, and oohing and ahhing over the leather interior and Pepper's other luxurious features. "This is a Ford?" they asked, astounded. "How did you win it?" "Do you have to give it back?" "When will they go on sale?" "Will you have to pay taxes on it?"

It seemed Pepper was the main attraction for quite a while, even though Food Network stars Chris Cosentino and Aaron Sanchez were there. If you watch Iron Chef America, you might remember them from last season's The Next Iron Chef. They were at Superdawg that day filming an episode of a new show, Chefs vs. City, which airs in July. No one from Food Network seemed to notice the third star on the lot, but they're foodies, not gear heads, so we forgive them for the snub.

Soon everyone hopped in their vehicles and the cameras started to roll. Pepper should be in a few passing shots, and her bright red bod shouldn't be too hard to spot. It was a fun experience, the entire shoot only took about an hour. Food Network must really know how to churn it out. Let's just hope all the shots with our Fiesta aren't left on the cutting room floor.

Afterwards we each enjoyed a Superdawg, and Mandy proceeded to drop various hotdog-related goo on Pepper's leather seat. With a little elbow grease, however, it's as good as new. It seems the swanky Fiesta can do the drive-in thing up right.

So the next time you're in Chicago, head up to the north side for a treat. They'll be glad you came.

Click here to see all of our Superdawg/Food Network photos: Chefs vs. City
Thanks for stopping!

The Fiesta is Ours!

That's right, folks, we are now the temporary owners of a brand new Ford Fiesta, one of the first to ever set foot, er, tire, in the US. Ford flew us to Chicago for a training event, where they showered us with food, swag, and contagious enthusiasm. Then they gave us the keys to our car and sent us on our way.

We're still wiped out from the trip, and haven't quite figured out how to import our video clips from the Sony Webbie cam yet, but we did get a few photos up on Flickr: Chicago Training Event

Here we are after first meeting Pepper.

Much more to come soon -- our secret missions start this Sunday!


fiestamovement
Posted by Anonymous at 12:42 PM No comments:

There aren't too many red Fiestas in the Movement, so we've been eagerly anticipating what Pepper is going to look like. Here's one of her twin siblings for comparison. Can you say hot rod? Pepper's gonna be smokin! (sans black dots)

4 days until we pick her up!

Now that we've won a Ford Fiesta for six months, we decided to release our Honda Element into the wild. Let her stretch her wings... make something of herself. Here's our story of goodbye. Enjoy!

On our way back from Atlanta, we decided to cruise through the Smoky Mountains. As we drove through a cloud along the Appalachian Highway, the road suddenly dead ended into a fireworks playground. It was strange, but magical. Then, little did we know that once we arrived to the Smokies, there would be vomit-inducing tourist traps on either sides of the mountain expressway. On the southern side, we saw the exploitation of Cherokee culture. Maybe exploitation is the wrong word... They are, in fact, there by their own will. But the carnival-like barrage was sort of unsettling to us. The street signs were kind of cool, though.

So then we set off into the mountains, where the rain poured and the wickedly cold wind roared. There were some gorgeous views. Mandy tried to do a "no rain" dance to make the experience less frigid. It didn't work.

On the other side, relieved to be headed home, we were hit with another shock. Dollywood?! Oh, yes. We had no idea this Branson-wanna-be was in such close proximation to a national treasure like the Smokies. And Gatlinburg! We thought it was a historic town. Whoever told us that needs a swift boot to the rear. Why is it the American way to destroy everything we have right up to our National Park borders? Obviously, we drove through as quickly as we could, marveling at all the pancake houses. Do you really need hundreds of them?

The coolest thing we got to see was the Olympic Slalom trainers on the Nantahala River, outside the Smokies.

We also saw a big rig stuck in the ditch, a suped-up dune buggie, a motorcycle for giants, and a car eaten by kudzu.

All in all, it was a pretty good trip! Click here to see full-size photos: The Smokies

Posted by Anonymous at 12:53 PM No comments:

Mandy came across a heated debate about the ethics of the Ford Fiesta Movement. Of course she had to put in her two cents. Read her comments here:

Posted by Anonymous at 12:45 PM No comments:

Well, we have a winner! The name chosen by popular vote is Pepper. As in, hot chili. Perhaps her full name could be Pepper Weasley, to please everyone. The third child of Hermione and Ron? Okay, we won't go there. But we will post this Ron and Hermione fan vid. Check it out for a chuckle!

Thanks for voting and keep coming back to check on Pepper. You never know where she's going to take us!

Posted by Anonymous at 4:21 PM No comments: 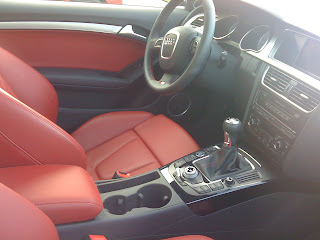 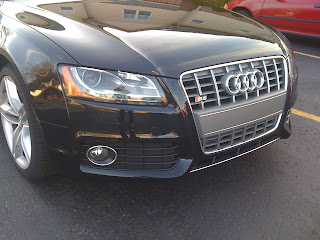 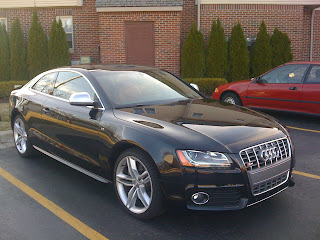 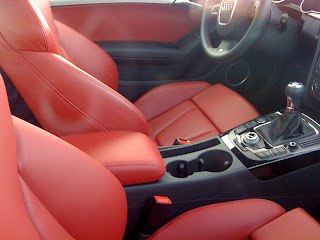 More car pictures...just practicing for when we get our Fiesta!  This appears to be either a 2009 or 2010 Audi S5 coupe.  It had manufacturer tags on it, so maybe it's a loaner out for review.  Since I haven't seen one of these up close yet, I couldn't resist grabbing a few photos.
-Joel

As you know, we've been assigned a Red Fiesta for our missions. Now it's time to name him/her. Feel free to add your own suggestions, or vote for one of ours. Let's do this thing!

On our way to Atlanta to visit Joel's brother, we stopped in Cincinnati to hang with a few friends and attend their CD release party. We were greeted by the Butter Jesus as we entered Cincy.

We headed over to the Redmoor to catch the show.

It rocked! Got to see Mike Mangione before Artists & Authors took the stage. Joel coined the genre as "alt hobo." It was great!

Then came our friends, Tye and Andrea with tight jams and vocal riffs. We had a blast. The Redmoor is a sweet venue--classy and hip with really great pizza and beer. A great start to the road trip.

You can check out their music here: myspace.com/artistsandauthors

Posted by Anonymous at 7:30 PM No comments: